What is International yogacon USA?

International YogaCon USA is a comprehensive Yoga Conference that aims to procure wellness & cultivate positivity in today’s challenging times & help people combat pandemic stress. Not just this, but it is a virtual month-long celebration to mark the “International Yoga Day.”

Key elements of the Conference

Topics of Talk in the Conference

Although yoga & meditation have been around for centuries, there’s still something we know very little about-
The science behind it!

To help you get acquainted with this lesser-known knowledge & explore the science behind yoga & mediation, American Academy for Yoga in Medicine brings to you ‘International YogaCon USA 2021’.

Register for this international conference where you will discover a plethora of information under the guidance of eminent doctors & researchers from across the globe.

This conference is free to attend but with mandatory prior registration.

Here is the link – https://www.aaymonline.org/yogacon-usa/ 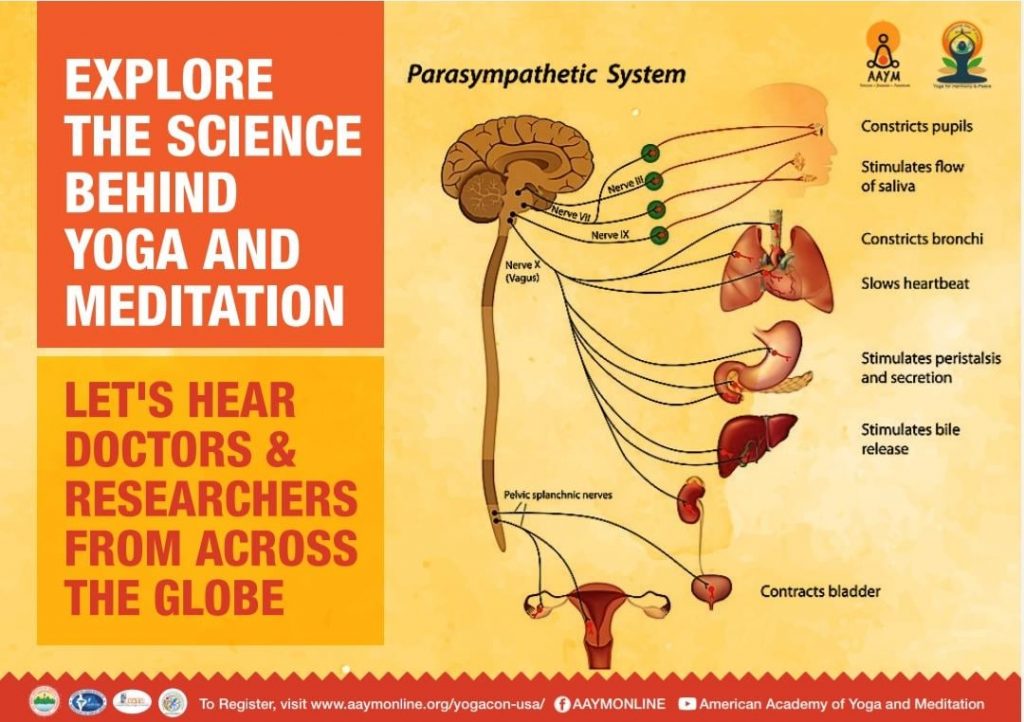 Get ready to discover the science behind yoga & meditation with a number of engaging webinars in the month of June.

Register yourself to witness this experience with some eminent speakers from all around the world.

Note – The fees for these webinars is simply a free registration.
Registration link: https://www.aaymonline.org/yogacon-usa/ Dr. David Frawley (Pandit Vamadeva Shastri) is a recipient of the prestigious Padma Bhushan award, the third highest civilian award granted by the government of India, “for distinguished service of a higher order to the nation,” honoring his work and writings as a Vedic teacher, which he received in March 2015.

He has a rare D. Litt. (Doctor of Letters), the highest educational title possible in the field of Yoga and Vedic sciences, from SVYASA (Swami Vivekananda Yoga Anusandhana Samsthana), the only deemed Yoga university recognized by the Government of India. He has a second D. LITT. from Ram Manohar Lohia Avadh University in Ayodhya, Uttar Pradesh that was given to him by the governor of Uttar Pradesh. He has a special National Eminence Award from the South Indian Education Society (SIES), affiliated with the Kanchi Shankaracharya Math, which has only been given to about fifty educators over the last forty years.

In India, Vamadeva’s translations and interpretations of the ancient Vedic teachings have been acclaimed in both spiritual and scholarly circles. He has worked extensively teaching, writing, lecturing, conducting research and helping establish schools and associations in related Vedic fields over the last more than three decades.

In addition he writes regularly for various publications and the social media on educational issues in India and the importance of Vedic knowledge for the entire world, which has given him a vast and diverse readership and following. Over the years he has been one of the main pioneers in introducing Ayurvedic medicine to the western world, as well as Jyotisha (Vedic astrology), the deeper aspects of Yoga and Vedanta, and the interpretation of the Vedas. 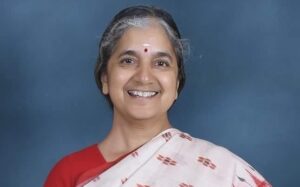 Sister Nivedita Bhide has extensively worked on the life and teachings of Swami Vivekananda and has also been engaged in social work for many years. For her contribution to the social work, she has been awarded with the fourth highest civilian award of India, Padma Shri. She has highlighted in great measure the relevance of Swami Vivekananda not only in the nation building of our nation but also in making India a world leader in spreading peace and harmony.

Nivedita Raghunath Bhide is the All India Vice President of the Vivekananda Kendra, Kanyakumari. She has written over 15 Books, presented papers in National and International seminars, and given lectures in IITs and Universities, including Kansas University in the USA.

She has represented India in Seminar on Swami Vivekananda conducted by ICCR in 2013 at Melbourne, Australia. She also participated in the In the International Meeting of Educational Experts at Darwin, Australia convened by UNESCO for the Asia-Pacific region in 1999. Karan Singh was born in Cannes, France into the Dogra dynasty. He was the only son of Maharaja Hari Singh, the ruling Maharaja of Kingdom of Jammu and Kashmir. His mother, Maharani Tara Devi, who was the fourth wife of his father, was the daughter of a landowning Katoch Rajput family and came from Bijapur (Vijaypur near Bilaspur) in Kangra district of Himachal Pradesh.[dubious – discuss][citation needed]

Singh was educated at Doon School, Dehra Dun, a boarding school, which represented a departure from the usual practise of princes being educated by tutors at home. The school was very elite, but it nevertheless meant that Karan Singh shared the classroom (though not the hostel) with boys from non-royal backgrounds, and received a standard education. Unusually for the scion of an Indian royal family, he then enrolled in a college for a graduate degree, receiving first a B.A. degree from Jammu and Kashmir University, Srinagar, and subsequently an M.A. degree in Political Science and a PhD degree from University of Delhi.

In 1950, the 19-year-old Karan Singh was married to 13-year-old Yasho Rajya Lakshmi, daughter of a nobleman belonging to the Rana family of Nepal. Her father, General Sharada Shumsher Jung Bahadur Rana, was a senior army officer and the son of Mohan Shumsher Jang Bahadur Rana, the last Rana Prime Minister of Nepal.The match, arranged by their families in the usual Indian way, was entirely harmonious and lasted all their lives. The couple had three children:

Yuvraj Vikramaditya Singh, elder son and crown prince; married Chitrangada Scindia, the daughter of Madhavrao Scindia of Gwalior, in 1987.
Ajatshatru Singh, second son; took to politics, was elected to the state assembly from the Nagrota constituency and became a minister in the state government. His wife is the daughter of an army officer.
Jyotsna Singh, only daughter, married into a chauhan family belonging to Mainpuri in Uttar Pradesh. 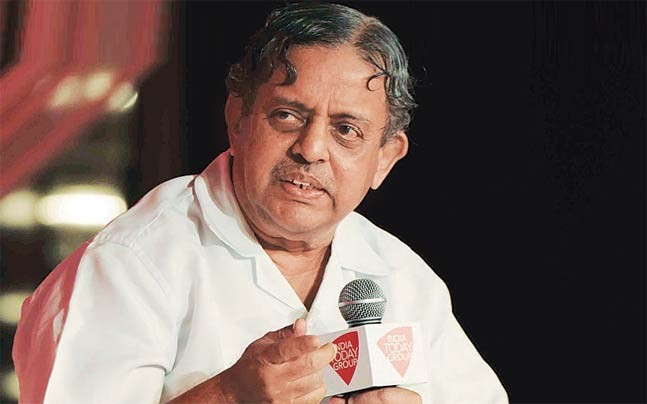 Dr. H R Nagendra is the president of VYASA and Chancellor S-VYASA University He is now the Chancellor of S-VYASA Deemed University. He has received many awards and accolades including Bharat Gaurav Award, Padma shri and others.

Dr. H R Nagendra holds PhD in Mechanical Engineering from IISc, Bangalore and is the president of VYASA and Chancellor S-VYASA University. After receiving his doctorate in 1968, he served as faculty of IISc in Department of Mechanical Engineering. He then served as Post-Doctoral Research Fellow in the University of British Columbia, Canada in 1969. Moved to NASA Marshall Space Flight Centre, USA as Post-Doctoral Research Associate in 1970, moved to Engineering Science Laboratory, Harvard University, USA as a Consultant in 1972 and Visiting Staff at Imperial College of Science and Technology, London later. In 1975,  joined Vivekananda Kendra, a service mission as a whole-time worker. Honorary Director of Training Centre, Vivekanandapuram, Kanyakumari. Between 1975 and 1993, served as the All India Secretary, Yoga Shiksha Vibhag, Vivekanand Kendra, Kanyakumari and between 1979-1986 also as Secretary, Vivekananda Kendra Yoga Therapy & Research Committee (VK YOGAS). Between 1993 and 2000, he was the All India Vice-President of Vivekananda Kendra, Kanyakumari. From 1986 to 2000, he was the Secretary of Vivekananda Kendra Yoga Research Foundation, Bangalore and the Director of Indian Yoga Institute, Prashanti Kutiram. From 2000 to the present, serving as President, Swami Vivekananda Yoga Anusandhana Samsthana, Bangalore and from 2002 to 2013, he served as the Vice Chancellor of Swami Vivekananda Yoga Anusandhana Samsthana, Yoga University in Bangalore. He is now the Chancellor of S-VYASA Deemed University. He has published 30 Research Papers in Engineering; authored and collected 110 papers on Yoga and co-authored 35 books on Yoga. He has guided nearly 20 PhD students. Currently Dr H R Nagendra is the Chairman, IDY (Internal national Day of Yoga), Experts Committee, Task force of AYUSH  (Ministry of Health &Family Welfare), SAC of CCRY (CENTRAL COUNCIL FOR RESEARCH IN YOGA AND NATUROPATHY)

‘A humble appeal to endure this blissful conference’ 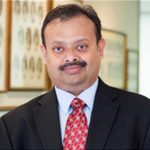 Dr. Basu Ray has two primary sets of research interests. He is involved in clinical research in cardiac electrophysiology which includes atrial fibrillation, VT ablation, and cryptogenic stroke. Dr. Basu Ray has been meditating since the age of six. His research centers on the use of meditation and yoga in modern medicine, particularly heart diseases. He is also one of the top ten cardiologists chosen by the American Heart Association to write the world’s first scientific statement on the use of meditation in the treatment of cardiovascular diseases. He has also been invited to present at grand rounds at many medical schools in the United States and abroad.  Dr. Basu Ray is the author of numerous research articles and book chapters in cardiology. He is also the Editor in Chief for Cardiac Electrophysiology for Stat Pearl.